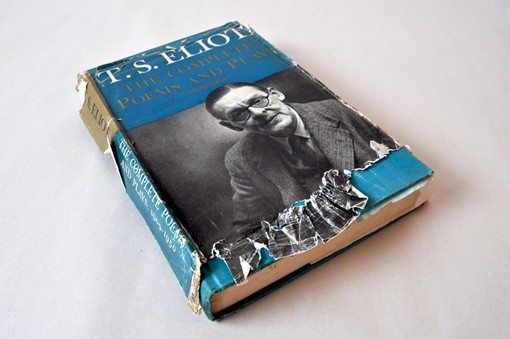 long ago while rummaging around in a huge dark chaotically claustrophobic bookstore I pulled T. S. ELIOT: THE COMPLETE POEMS AND PLAYS off a shelf and found a dead cockroach on page 37, pasted to the page just above the title The Waste Land. It was a large cockroach even in its shrunken, blackened state, the shell crumbling, the legs all but gone. It almost looked like a decaying question mark, an epitaph that Eliot hadn’t even considered.

I almost bought the book just because of the cockroach. Then decided that I had enough cockroaches at home, both alive and dead. Not to mention books by and about Eliot. Still, this presented an interesting problem. Why did this insect just happen to be crushed on the first page of The Waste Land? Had some half baked trickster caught it and slammed the book shut on its quivering body or had it simply crawled into the book while it was spread open and been accidentally killed when an inattentive reader flipped the book cover shut?

Personally, I took the dead cockroach to be some kind of sign, some premonition for the coming end of poetry in the twenty first century. And what better portent than a dead cockroach stuck to the first page of The Waste Land? I fell in love with the perversity, the fucked audacity of it. In a way it’s almost poetic. And, maybe that might be the supreme irony. A metaphor signalling the end of poetry. Or, could it almost be signalling the beginning of an undreamt anarchy?

If you are a writer at the deadfuck end of the twentieth century and the buttfuck beginning of the twenty first century then you are pretty much aware that you are working in the salvage yard of language. Salvage yard might be a polite way of referring to the shitpile alphabet we all muck around in. Or, what’s left of it.

Except for the books of Charles Bukowski, the phenomenon of HOWL, and ON THE ROAD which isn’t poetry but comes damned close to it in some places, nobody buys poetry and nobody reads poetry all that much. If at all. Unless it is the lyrics to some pop song, unless it is associated with Kurt Cobain or maybe Bob Dylan.

Contemporary poetry, the kind you might find in The American Poetry Review or Poetry Magazine or The Paris Review is mainly beyond boring. It’s so boring that I doubt that even any poets publishing in those journals ever read it. Try reading a John Ashbery poem or a Robert Pinsky poem or a Mark Strand poem and you’ll see what I mean.

And, anyone with half a brain and what passes for a university education knows that reading this kind of poetry is a futile endeavor. Futile because it puts the reader to sleep. Futile because it basically offers the reader nothing. No passion, no risk, no danger, no love, no violence, no threat whatsoever. If I gave you the opportunity to read the latest book of poetry by Susan Howe or a chance to see the latest thriller by the Coen brothers, what would you choose? The funny thing is that I marginally like some of Howe’s work, but I’d choose the Coen brothers. Because going to the movies is maybe among the last tribal adventures readily available to us.

There really isn’t much poetry out there that could compete with 3:10 TO YUMA, NO COUNTRY FOR OLD MEN, or THERE WILL BE BLOOD. Sometime around the 1980s or early 90s american poetry caught language leukemia, cancer of the word. By that time it had stopped being tribal while rock n roll and the movies became totally tribal. American poetry shortly after HOWL had also stopped being primal. Primal in the sense that it came passionately and irreverently right out of the blood. It had stopped being risky. Except for Bukowski. Except for levy. Except for Micheline. The early Outlaw Poets and those who came after. Kell Robertson, Tony Moffeit, S. A. Griffin, John Macker. Except for DILLINGER. Except for the archetypal volcano boiling at the heart of DILLINGER.

Mainstream american poetry has become a literary landfill. A huge pulsing dump where there is no smoke, no fire, because nothing is burning. It is just an enormous stinking corpse dumped at the septic center of our culture. And, while we may survive as a culture through great movies and music that speaks primarily to the blood and the crotch, we still need the kind of primal danger, the kind of primal excitement that comes out of the written and spoken work. We need more than the black cockroach pasted above the title of The Waste Land. We need the kind of poetry that slices us right down to the veins and leaves us shaking. We need sweat and we need sex and we need danger we need crotch and we need the violences of all our failed and pulverized dreams conjured into something more than the tame shit that major american presses are currently offering. We need it as raw and real as RESERVOIR DOGS or HEAT or DIABOLIQUE or FARGO or M.

Fuck all that shit about breath and breaking the line and erasure in poetry. Gimme danger, gimme blood, gimme cunt, gimme speed, gimme a fist in the face, gimme a slug in the guts, gimme the edge where James Dean stands staring at the wreck below and the desolation of the Pacific Ocean. Gimme the guts and the bravery to write about the hope and oblivion of all of our dreams, savage and bloody and howling and american.

One Response to gimme danger